on the Neisse River

Situated on the ancient and medieval trade road, "via regia", Görlitz flourished in the late Middle Ages as a place of commerce and cultural center of the Upper Lusatia region.

In the undulating hills and fertile soils of Upper Lusatia, many villages contain Umgebindehäuser, half timbered houses representing a combination of Franconian and Slavic style. During the 13th century Franconian and Thuringian settlers came with all their belongings via Saxony to the Lausitzer hilly country. They found fertile pastures, crystal clear water and forests rich in timber to build their first houses. They settled by a creek and each settler cultivated a small strip of land (Hufe) of up to 2,5 km/1,55 miles long, from the farm house to the ridge of the mountains.

There was a small village named Gorelic on the banks of on the Neisse River from a very early period. On being rebuilt after destruction by fire in 1131 it received the name or Gorlic (Zgorzelice or Zhorelec). During the 12th century it received civic rights, was strongly fortified and was a part of the Kingdom of Bohemia until 1635.

In 1346 the Lusatian League was formed, which consisted of Bautzen, Görlitz, Kamenz, Lauban, Löbau and Zittau. In 1352, during the reign of Casimir the Great, colonists from Görlitz founded the town of Gorlice in southern Poland near Cracow.

At the time of the Reformation, Lusatia became Lutheran. During the The Schmalkaldic War in 1547, the Lusatian League sided with the Schmalkaldic League. As city leagues, they shared the same form of government. Görlitz was several times besieged and taken during the during the Thirty Years' War (1618 - 1648). The region of Upper Lusatia was accorded to the Electorate of Saxony in 1635. 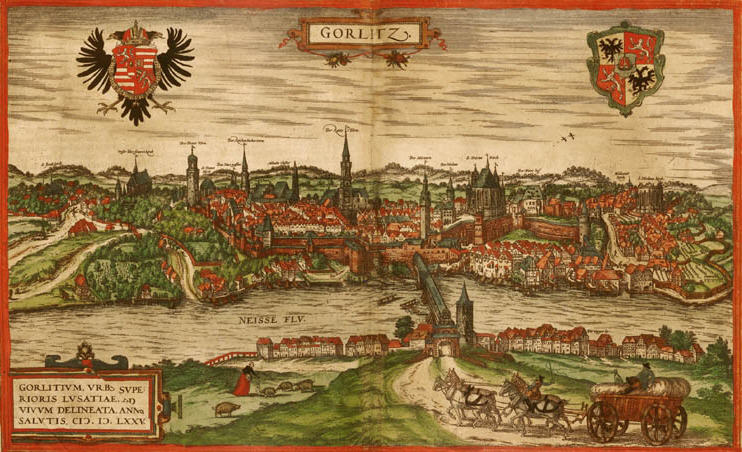 In 1815 the town, with the greater part of Upper Lusatia became part of the Prussian province of Silesia. After Breslau, Görlitz was the second largest and most flourishing commercial town of Silesia. The railway line from Dresden to Breslau crossed the Neisse river here at the junction of the line to Berlin.

At the start of the 20th century, Görlitz was one the wealthiest towns in Germany because of the extensive forests of 70,000 acres, which were the property of the municipality. It was surrounded by beautiful walks and fine gardens, and although its old walls and towers had been demolished, many of its ancient buildings remained. These included the fine Gothic church of St Peter and St Paul, dating from the 15th century, with two stately towers, a famous organ and a very heavy bell; the Frauen Kirche, erected about the end of the 15th century, and possessing a fine portal and choir in pierced work; and the Kloster Kirche, restored in 1868, with handsome choir stalls and a carved altar dating from 1383.

In 1945 the Neisse River became the border between Germany and Poland. The part of Görlitz on the eastern bank became Zgorzelec.

In 2006 the towns Görlitz and Zgorzelec jointly applied to be the European Capital of Culture in 2010 and were awarded second place. The two towns have a common urban management and annual common sessions of both town councils. Two of the numerous bridges over the Neisse river have been rebuilt.